Many, many thanks to Spubba for designing and producing my title banner...so frickin' awesome!!! :D

Due to lack of planning/shopping, we didn't really have anything ready to cook for dinner tonight...soooo, we decided that we'd have an egg dinner.  Yeah!  Mmm, eggs.

However, also due to the above, when it came time to cook these delicious eggs, I realized we only had three of them.  Woops.  Good thing we also had a lunch-sized portion of leftover hunnybun meatbeals and spinach to divvy up between us!  I also wanted to try frying the eggs in the rendered beef fat I made a few days ago (oh yeah, I forgot to load those pics!).

So, I put about a teaspoon of the fat in the pan and cooked the eggs.  EGG-citing story so far, eh???!  Well, seeing as I'd never cooked eggs in beef fat before (usually butter or bacon fat), I wasn't entirely sure how this would go.  Anyway, they turned out slippery (yay - no sticking to the pan like usual!) and were really tasty.  I'm sold!

Eggs (sunny side up) with meatballs and a small pile of previously-frozen spinach.  It was really yummy!  (Apologies for the lack of photo...)

Here's the pile of beef fat in the slow cooker... 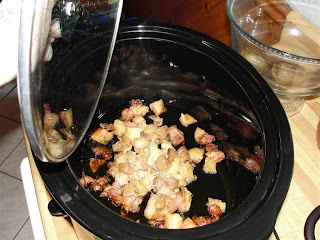 After a few hours on low, the golden oil started to accumulate.  I scooped it out in two separate attempts... 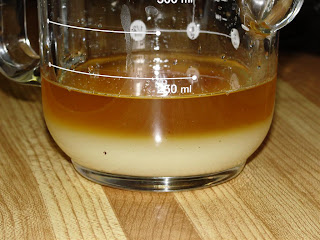 And the crispies that resulted (some of which kind of tasted like fat from a steak, but others, not so much!)... 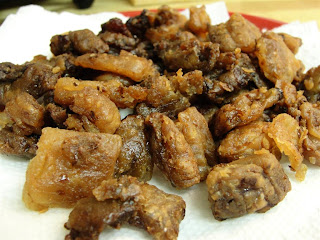 Lesson learned for next time:
- Spread the bits more across the bottom of the crock
- The bits should be cut into smaller bits - some pieces remained puffy and held the oil within
- I need to think ahead and get a glass jar to store this stuff in
Posted by Unamused Mouse at 10:05 PM

Unamused Mouse
Toronto, Canada
Hi! My name is Mouse ('cause I'm quiet like one) and my life changed forever the evening of Dec. 31, 2009. While reading Fark.com I saw a link to a post on Richard Nikoley’s Free The Animal blog, which was about his “no soap no ‘poo” experiment. Fascinated, I read on...and on, right through to the next morning and beyond! Through Richard I also discovered Paleo nutrition and then Primal nutrition through Mark Sisson’s website, marksdailyapple.com. After adopting many aspects of each lifestyle, I've dropped approx. 20 lbs, have clear skin and my hair is soft and wavy. Here on my blog I ramble about my experiments, successes, failures, and other things that interest me. Maybe you'll also have something to say. Yours, Mouse.