Many, many thanks to Spubba for designing and producing my title banner...so frickin' awesome!!! :D

Today was an interesting day, as I had decided to FINALLY try making mock mashed potatoes out of cauliflower. The head of cauliflower was purchased a few days ago and was patiently waiting in the fridge for it's name to be called.

We had ribs gently brushed with apple butter in the crock pot and they were just about done. Then, out came the cauliflower! I tried to remember back to the instructional video I had watched via MDA, and while I remembered some of the ingredients, I decided not to get too technical and just wing it.

Both hubby and I were excited to try this recipe, as we're both HUGE fans of traditional mashed potatoes. (My step-mum even grows a small crop of potatoes specifically for me, for Thanksgiving mashed potatoes!) I separated and rinsed the florets and popped them into the microwave for 10 minutes to steam. Then, into the food processor they went (a few at a time -- it's only a 7-cup) and once they were all smashed up, in went the 1/2 cup of 14% MF sour cream, 1/2 cup melted butter, Montreal steak spice and seasoned salt. Whipped that up some more with the machine, and then it was time to taste...

We have a winner!! To hell with mashed potatoes and their empty carbs -- I'll take mashed cauliflower from now on, thanks!! :D 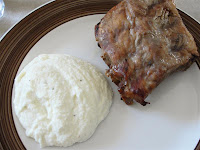 Unamused Mouse
Toronto, Canada
Hi! My name is Mouse ('cause I'm quiet like one) and my life changed forever the evening of Dec. 31, 2009. While reading Fark.com I saw a link to a post on Richard Nikoley’s Free The Animal blog, which was about his “no soap no ‘poo” experiment. Fascinated, I read on...and on, right through to the next morning and beyond! Through Richard I also discovered Paleo nutrition and then Primal nutrition through Mark Sisson’s website, marksdailyapple.com. After adopting many aspects of each lifestyle, I've dropped approx. 20 lbs, have clear skin and my hair is soft and wavy. Here on my blog I ramble about my experiments, successes, failures, and other things that interest me. Maybe you'll also have something to say. Yours, Mouse.